Call It What You Want by Brigid Kemmerer (384 pages)

Call It What You Want by Brigid Kemmerer (384 pages)

“Call It What You Want” Juggles Many Elements Of Hardship

I am a quick reader; I often devour books in one sitting. But Brigid Kemmerer’s Call It What You Want made me slow down and savour. This novel juggles many elements and does so masterfully.

The story is told in point-of-view form, alternating between Rob and Maegan who are both facing hardship. Rob has been completely ostracized at school after his father was caught embezzling money from neighbours and then failed to commit suicide. Rob and his mother are now broke and must care for Rob’s father around the clock. Maegan, caught cheating on the SAT, forced dozens of students to retake the test after their scores were subsequently invalidated. Maegan is also hiding her sister’s pregnancy, the result of an affair with her college professor. Suffice to say, Rob and Maegan are desperate for companionship.

The novel opens with Rob and Maegan being forced into a group project together, something that might bring back memories for all of us. As a teacher, I can say that Kemmerer captures the awkwardness of forced pairings perfectly. As Rob and Maegan begin spending more time together to work on the project, they come to learn and understand the truth about one another. Rob, regardless of what everyone at school (and their parents) might think, had nothing to do with his father’s embezzlement. Maegan is not a habitual cheater but made a poor spontaneous decision to copy off her neighbour’s test. In dealing with much more than the average adolescent stress, Rob and Maegan come to learn that one mistake does not define you and that we are not responsible for the mistakes of our family. 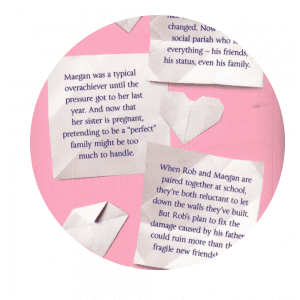 A Balance of Elements And Dynamic Characters

Kemmerer balances a number of elements in this novel including romance, crime, morality, and mystery. We are treated to a truly wholesome romance that begins to grow between Rob and Maegan that is full of vulnerability and respect. Rob’s vulnerability in particular is refreshing in a sea of YA novels depicting “tough guys”. The interactions between Rob and Maegan seem genuine, as do the ways in which other students treat them disdainfully. Kemmerer creates rich, dynamic characters that stick with you.

This novel was a real treat. I felt so connected to these characters and could not only see my students reflected in them but also memories of myself as a teen. Following along as Rob and Maegan learn invaluable lessons will allow you to reflect on and grow from your own mistakes.

What book should we review next? Let us know by emailing us here!

Get to Know Chef Roger Mooking

My Favourite Book:To Kill A Mockingbird by Harper Lee